What class will you be rolling first on TBC? I thought this was an interesting poll posted on /r/classicwow.

Yesterday, we opened up region-wide PvP matchmaking for Oceanic players, to ensure that all players in this region who compete for rewards actually play against one another. Following that update, however, we heard loud and clear from players who know how it feels to play on distant servers. High latency is not worth the upsides of potentially smoother matchmaking.

We’re committed to providing a responsive, enjoyable game to players in every part of the world, and we will pay careful attention to PvP on Oceanic realms over the first few weeks of the first season of Arena play. We’re looking for ways to improve matchmaking and players’ ability to rank up without introducing unbearable lag.

We don’t want to permanently implement a region-wide rewards system where some of the players never play against the others. We’ll have an update on that for you in the weeks to come.

Thank you very much!

There are numerous class abilities and spells from Original World of Warcraft that were re-implemented in WoW Classic with spell batching in mind, and we initially expect bugs or adverse consequences with spell batching reduced. In this PTR, testers have an opportunity to join us in finding such issues. Raids and battlegrounds are available in this PTR to facilitate testing in a wide variety of game content.

Please use the in-game bug reporter (default hotkey: mouseover+F6) in the PTR to submit your bug reports or feedback on abilities with spell batching reduced.

When logged into the PTR, you can mouse over any item, spell, or talent and press the assigned hotkey to initiate a bug report for that item or spell. Bug reports created in this way include valuable metadata about the spell, your talents, and your player-state when the bug is submitted.

If you’ve unbound your “Open Bug Report” hotkey, you can rebind it in Keybindings -> PTR.

Thank you for testing WoW Classic with us!

Hey guys! I’ve added a new section for attunements, if you are having trouble figuring out how to get attuned for the different raids check it out in the menu!

Project Ascension is back at it again!

Ascension just did that with Classic WoW.

If you’ve never heard of Project Ascension, their claim to fame has been their slogan of ‘create your own class’. Well, they’re delivering on that pretty interesting this time. Instead of picking all your abilities like normal, or getting them assigned randomly like last season, Ascension is introducing this playstyle where instead of picking all your abilities, you draft three, and pick one. What you draft is random, but you still get to choose. So maybe you get lucky and draft a few good combo abilities like shadowbolt shadowform and mind flay, and then next thing you know the best thing you can grab is mortal strike. Sure, you get a few reroll scrolls to fine tune it, but it actually seems pretty fun to draft a whole hero to 60 and then see how good you can make it.

Their season 5 video they posted up on youtube is like 20 minutes long just because of how much stuff they’re doing with it. Draft mode is kind of the main thing, but they’re also doing ironman, x1 exp rates, and legion invasions (TBC coming soon I guess?). They even put in 1v1 arenas where you can win your opponent’s gear.

I’ve said it before, but Ascension is pretty much WoW plus. It’s familiar but different, and it feels like it breathes new life in a game that by this point we’ve all played to death.

Season 5 releases November 8th, but their last season is still running until that happens. It’s worth jumping into for an afternoon.

You can check them out at https://project-ascension.com

Hello everyone. We wanted to return to this subject and put some closure on it. As always, It is our top priority to resolve any issues that prevent players from having a smooth gameplay experience.

Immediately after the Distributed Denial of Service attacks against our game service began, the Blizzard Security Team worked around the clock with local and international law enforcement agencies to track down the source of the DDoS. It is our understanding that, within a few days, authorities were able to successfully identify and arrest a suspect.

We really appreciate your patience and understanding.

We will let you know when the new realms open and free character moves are enabled. 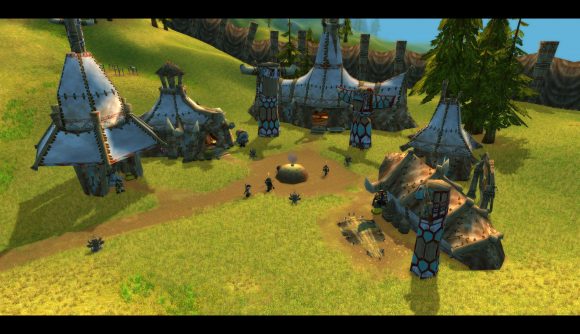 With hotfixes that we are currently deploying to all WoW Classic realms, we are substantially increasing the number of players that can be simultaneously logged in and playing. We expect this to result in smaller queues for realms that have large queues, and some realms should no longer have queues at all.

We will closely monitor performance and stability throughout this process.

Thank you very much.

We have opened new realms in this region:

We recommend that players looking to avoid queues on Full realms move to this new realm for a smoother experience.

We have opened a new realm in the Oceanic region:

The other two PvP options in the Oceanic region are currently experiencing significant login queues, so we’re bringing an additional realm online to handle demand. We recommend that players looking for a smoother experience strongly consider moving to this new realm, which should be drawing upon a population base that is easily sufficient to support an additional healthy Oceanic PvP realm community.

Thank you for your patience!

Why does Herod still have a 900 person, 8 minute queue when it’s showing Medium population?

The way realm population display currently works once the servers are live is that High, Medium, and Low are determined dynamically, in terms relative to the most crowded realms. So a realm with pretty rough queues (say 4k-5k) might end up showing as Medium because you aren’t Faerlina, Herod, etc.
This is how it’s worked for a long time, but the unprecedented size of the queues on the handful of outlier realms is skewing the algorithm. The team’s first priority is stability and getting new servers online as needed, but beyond that, we’ll look into changing this logic to be more intuitive (i.e. showing “Full” when a server has a queue, for starters). I know, this is technically not #nochanges, but then again neither are 20k people waiting to log into the same realm…

You MUST have known there would be long queues. Why the hesitation to have servers in place to handle extra players? (not characters)

I understand the frustration: Anticipating and planning around jumping back into this world we’ve all missed, only to be stuck in a long queue, is not the experience we want anyone to have.

But from the start of planning for this launch, we’ve tried to prioritize the long-term health of our realm communities, recognizing that if we undershot the mark in terms of launch servers, we could move quickly to add additional realms in the opening hours. But if we went out with too many servers, weeks or months down the line we’d have a much tougher problem to solve. While we have tools like free character transfers available as a long-term solution to underpopulated realms, everything about that process would be tremendously disruptive to realm communities, and so it’s something we want to avoid as much as possible.

Thus, we took the path of launching with few enough realms to still thrive in the event that our most conservative estimates ended up proving accurate, while having enough servers ready to activate at a moment’s notice if needed. And clearly they were, and are, needed.
We’ve released over 20 new realms worldwide so far since launch, and we’ll be up around the clock continuing to do so until everyone who wants to experience Classic is able to. But even still, as we bring new realms online in a given region, we wait for them to fill before opening new ones, because we want to make sure that each and every realm has a healthy population in the long term.

There is a known issue that’s causing zeppelins and boats to be unavailable on certain servers (mainly the ones brought online after initial launch), which is obviously a major concern if you’re looking to switch starting areas to meet up with friends, or are getting to higher levels and have quests sending you across the sea. The upcoming regionwide restarts (4.5 hours from this post for NA/OCE) will fix this going forward.

With the release of WoW Classic mere hours away, I wanted to provide a few updates on what will happen with the Classic sections on the forums:

For now, we will not be adding Class or Profession sections for Classic. We encourage you to use the existing sections and prefix your thread title with [Classic]. We will monitor these sections over the coming weeks.

Not long to go now!