First and foremost, gear is important.
This is the official BiS gear list for 3.3 Retribution.
Alternative link: http://legacy-wow.com/paladin-ret-gearlist-level-80/

Some ask “Why leather? Why agility gear?”. The question is answered more simply than some may think. Agility grants a Paladin with an incredible amount of melee crit, and the attack power that comes on agility items makes it very worthwhile, and in some cases better than the available plate items by a small margin.

Now, items individually can easily be decided what is better. However, you must think of your gear as a set. This is where specific stats come into play.

Hit rating – You will need 264 hit rating to have 8% hit, which is the “cap”. Meaning that anymore than that is a waste.
Expertise – 26 expertise is the “soft cap” and none past that is required. Some would argue that the number is lower on Molten, but for the sake of the guide, let’s play it safe. The main sources of expertise are on gear, Glyph of Seal of Vengeance, and some race’s special abilities. This stat should never be gemmed for.
Because this is Warmane and Expertise is bugged, you can get away with having 22 expertise instead of 26.

These two stats are what you need to build your gear around. You want to stay as close to the caps as possible. Not be below them or go over them. To maximize your DPS efficiency, you want to aim for a perfect and exact amount if you can. That is why you have to think of your gear as a set, because only certain special setups will be able to obtain this.

Why aim for perfect on these two stats? Having not enough will drop your DPS by an enormous amount. Having too much will limit to an extent the availability of other DPS stats.

The main DPS stats are (and listed by importance):

With all that being said, no, armor penetration is not a stat that is good enough to pursue. However, it shouldn’t be avoided, either. As it does still increase our DPS, regardless of how small the amount.

Relentless Earthsiege Diamond
– Why? – Two reasons. First of all, as already discussed, agility grants a great deal of crit to you. Second, your only other real alternative is basically the same thing, but it requires 2 blue gems. That holds you back on half a red gem. You can activate this meta with a single Nightmare Tear, whereas the other you cannot. Thus allowing you to further increase your DPS slightly.

Nightmare Tear
Always have one of these to activate your meta gem. ALWAYS

Bold Cardinal Ruby
Aside from your meta gem and Nightmare Tear, you will gem these in all of your available sockets. Socket bonuses do not matter in most cases. This gem setup is proven to maximize DPS. The only exceptions is when you have a +6 or +8 strength socket bonus and no blue gems required, unless you wish to place your Nightmare Tear in that blue socket.

Other useful gems include:

Inscribed Ametrine – Used to achieve good socket bonuses only after you are hit and expertise capped.

Etched Ametrine – Only used to reach the hit rating cap if you are not already capped.

Precise Cardinal Ruby – Only used to reach the expertise cap if you are not already capped.

Fierce Ametrine – Can be superior to Inscribed with Shadowmourne and Tiny Abom trinket on sustained targets (crit will remain superior when you have to change targets at regular intervals). Please use RAWR to simulate when these gems are good for you.

I won’t cover all profession specific enchants, but if you have the profession, you should know what they are. If you deem them better, then by all means, use them.

Seals
What should you use? Normally you would use

Seal of Righteousness? This seal now works as intended, and the judgement damage is absolutely massive. I recommend this for single target DPS with weaker gear and shorter fights.

Seal of Command? This seal is bugged, as it only hits the main target of Divine Storm. Seal of Righteousness is competitive with this seal due to it proccing on all Divine Storm targets when Seal of Command does not.

Buffs
To further increase your own DPS, and the DPS of your raid or party! Having a raid or party member without a buff from you is bad. It’s a fail on your part. Don’t do it. I will explain the purpose of each buff, hopefully so that you won’t be confused on how to handle your buffs and end up buffing incorrectly, or not buffing at all.

Greater Blessing of Might
aka BoM and GBoM
These are given to physical DPS only. Meaning you do not give it to casters. You may give it to tanks if they already have GBoS or GBoK. Also, if you have a Warrior in your group that is keeping up their attack power shout, then you may wish to talk to him/her about who should do such buffs.
This buff is best used by the following classes:

– And again, it can be given to tanks that already have GBoS or GBoK. This will increase their threat generation.

Blessing of Wisdom and

Greater Blessing of Wisdom
aka BoW and GBoW
This buff is obviously only given to characters who have and use mana. Now, this buff is generally considered weak because usually BoK or GBoK is preferred by such classes. However, it is still useful as a secondary buff, and may be used as a primary buff on very weakly geared mana users.
This buff is best used by the following classes:

Blessing of Kings and

Greater Blessing of Kings
aka BoK and GBoK
This buff is attractive to everyone. Especially the players with good gear. The better their gear is, the more they will get out of this buff. Generally this buff is given first to casters, and is a secondary to physical DPS. It is primary for tanks especially because it gives stamina and agility to them.

Blessing of Sanctuary and

Greater Blessing of Sanctuary
aka BoS and GBoS
Now, you won’t normally have this spell, but it is important that you understand what it is and what it does. It is primarily given to tanks to increase their survivability through stamina and damage reduction, and also increases their threat generation by increasing strength. Don’t forget that it also grants mana whenever an attack is dodged, blocked, or parried. It is commonly given out to the entire raid mainly because of the 3% damage reduction, as that is the only portion of the buff that stacks with Blessing of Kings. (Or should)

Rotation
This is what we call “FCFS”. That means “First come, first serve”. Meaning that basically… whatever comes off cooldown, use it. However, there is a priority system. Here is a list of the DPS ability priorities.

With more than two parts of T10, you get the following bonus:
(2) Set: Your melee attacks have a 40% chance to reset the cooldown on your Divine Storm ability.

Thus, using your Divine Storm cooldown as soon as possible will increase your DPS, as it can always reset with your next Auto Attack. Not using it in time can potentially waste a reset and thus reducing your DPS, thus your Divine Storm??s priority increases and surpasses your Hammer of Wrath, even when the boss is below 20% health.

Judgement of Light (Always on top because it is your source of mana.)
**

Hammer of Wrath (Only when a boss is under 20% hp)

Other spells, abilities, utilities, and cooldowns.

Everyone is encouraged to read talent descriptions and understand them, then create builds of their own. Every person has their own playstyle, and is encouraged to embrace such.
There are many routes you can take on this. You can tunnel vision for high DPS e-penis, or you can spec to provide your raid with as many buffs and cooldowns as possible, as was intended. Keeping your raid alive, assisting them however you can, and topping the damage meter is where the real skill lies.

Standard Aura Mastery spec: http://wotlk.openwow.com/talent#sVhdZVZVfbx0IuhdIfsu
– 3 points free for distribution.
– These points can be put in Pursuit of Justice (generally recommended), Seal of Command and Vindication.
– Put points into Vindication if your group does not have a consistent source of this debuff.
– 2 points can be taken out of Improved Blessing of Might if your group already covers this buff.
– Divine Intellect vs Unyielding Faith – The mana benefit and spell crit is negligible, but can help if you are regularly having mana troubles. If not, Unyielding Faith is preferred for encounters such as Blood Queen Lanathel.

Divine Sacrifice Spec: http://armory.twinstar.cz/talent-calc.php?cid=2&d=wotlk&tal=000000000000000000000000005502010220000000000000000005232050203331302133231331
(Recommended as an option for raiding with a serious guild on progression.)
This build will lower your DPS, but can boost raid survivability when properly coordinated. If your guild’s raids are taking too much damage during specific damage phases, they can coordinate their paladins to use Divine Sacrifice. Most Holy Paladins and Protection Paladins will already have this. Which means you should only invest in this spec if it is absolutely necessary to have another Divine Sacrifice for your raid. Keep in mind that it is group-wide, not raid-wide.

Aura Mastery spec is recommend in most cases.

Bracers of the Heir
Hands:

Heroic-Mode Items Priority List (Includes agility items and leather)
(Be sure to use one 20 Expertise gem in this set.)

Death’s Choice for Horde, or

Inscribed Ametrine – Gemmed in every Yellow Socket xcept the one on the Ashen Verdict Ring for Alliance Players.
*2x

Seal of Many Mouths
Finger1(Horde):

Band of the Bone Colossus
Finger2:

Death’s Choice for Horde, or

Etched Ametrine Gemmed in the Hands and in the Back.
Horde: 2x

Inscribed Ametrine Gemmed in the Hands and in the Back.
1x

Trinkets (Listed from best to worst quality. ICC and RS trinkets only.)

Tiny Abomination in a Jar (Heroic)

Tiny Abomination in a Jar

Weapons (Listed from best to worst quality. ICC weapons only.)

The Paladin Philosophy
I encourage everyone to read all of it before dismissing it. Thank you.

Paladin philosophy? What philosophy?
First and foremost, your role is to support others. Not DPS. Not heal. Not kill. Support is what defines us, and there isn’t any other class in the game that is better at it. Use the knowledge above to help your allies stay alive, and to help control and finish the enemy. Buffs, cooldowns, heals, crowd control, stealth breaking, and DPS assistance, are all involved in this.
I would like to especially encourage everyone to find a way they like to play, and are good at it, and follow through with it. This information is provided to help get you there, but is by no means a specific guideline you must follow. 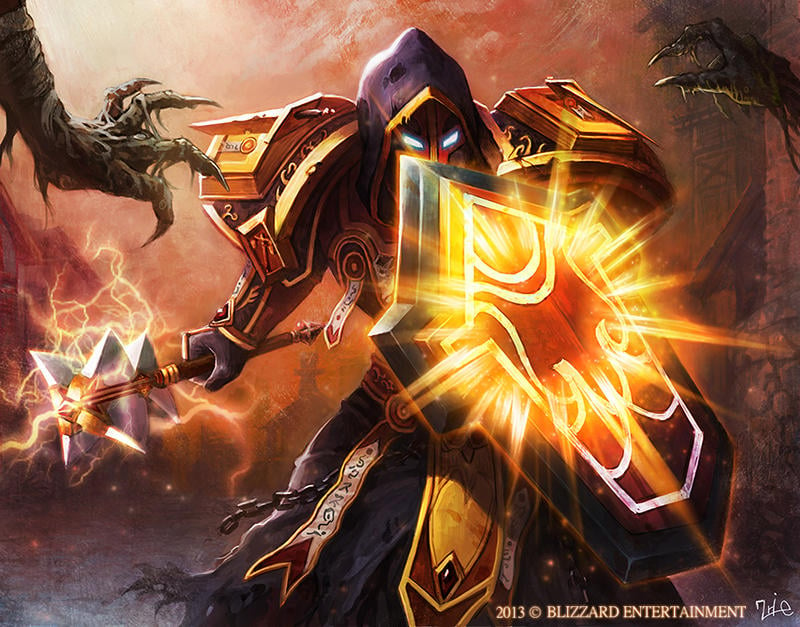