You will want to equip yourself and your friends as your skill rises. If you keep your skill at 25 plus five times your level then you will always be able to make items you can equip at their minimum level. Outside of the items you make because you want to, or to fulfill the Blacksmith quests, there are a series of minimum-material items you can make to advance your skill, mostly consisting of stone, misc. items, and some low-material armor items.

At 75 you learn Coarse Grinding Stone, which are green when learned. Make those until they turn grey at 100 and save them for making further items. Turn any tin and copper into bronze bars but save them. Make Silver Rods until they turn green at 105 (and sell them to Enchanters) then make Rough Bronze Leggings (with your saved bronze bars) until they turn green at 145 or even to grey at grey at 175. These take 6 Bronze Bars and sell to the vendors for 9.62 s each, so if you can buy stacks of 20 Bronze Bars for 30 s or less, you can actually make a profit while you skill up. Also at 125 you learn Heavy Grinding Stone. Make these until they turn grey at 150 and keep them for making other items. If you are able to learn the Deadly Bronze Poniard dropped plan at 125 then you can make and sell it at a profit until it turns green at 155 and grey at 185. The Patterned Bronze Bracer (green at 150) is required for a Badlands quest. At 145 you learn to make your first rare (blue) item, the Shining Silver Breastplate (green at 175) which sells well.

Beginning at 150, make Rough Bronze Leggings until they turn grey at 175. Iron Buckles are easy but turn grey at 155, while Golden Rods turn green at 155 and grey at 160. Golden skeleton keys are green when learned and grey at 170. You will want to equip yourself and friends with the Green Iron Set and that will provide some skill ups. If you are lucky enough to learn the Iron Shield Spike plan at 150 then you can make and sell these at a good profit until they turn green at 180 and grey at 210. Another profitable drop is the Iron Counterweight, green at 190 and grey at 210. At 200 you learn Solid Grinding Stone so make those until they turn grey at 210. To get from 210 to 225, make Golden Scale Bracers to 215, then make Steel Plate Helms to 225. You will also be equipping yourself with the Golden Scale armor set and the Moonsteel Broadsword is required for a quest in Dustwallow Marsh. A number of expert weapons and armor are saleable, including the rare Green Iron Hauberk at 180 (green at 205, grey at 230).

At 225 make Steel Plate Helms until it turns green at 235. Then make Mithril Spurs to 250 (turns green at 255). At 250 make Dense Sharpening Stones until they turn grey at 260. The Heavy Mithril and Ornate Mithril armour items are good for their level, so you can also skill up some on making the mithril items for the Mithril Order quests. The Ornate Mithril Boots are popular with warriors for their remove root effect and they (and the Ornate Mithril Helm) turn green at 265. Go back to Mithril Spurs (which are readily saleable) until they turn grey at 275 and then make Thorium Bracers to 280. Now make Thorium Helms to 300. An alternative is the Imperial Plate armour set, starting with the Imperial Plate Belt and Shoulders at 265, Bracers at 270, and then Helm and Boots at 295. While these use more thorium than the Thorium armour items, they can be sold for a profit even if you buy the materials.

As an Armorsmith or Weaponsmith you can skill up making the items for your specialty Quest. Be sure to make them as soon as you learn them, and save the items to turn in for the quest, so you get your skillups. An Armorsmith can then skill up with Truesilver Gauntlets until they turn green at 245 (or grey at 265) and Truesilver Breastplate until it turns green at 265 (or grey at 285). Those are both saleable items. A Weaponsmith can gain skillups with the Shatterer, Phantom Blade, Blight and Truesilver Champion, as these are also saleable.

There is no one best path up because it depends on which dropped plans you get a hold of, which specialty you take, and which items you can make for guild mates or sell that give skillups, which will vary by guild and server. It also depends on whether you learn every plan going up or only the bare minimum because you are trying for a truly lowest cost or fastest power-leveling run up to 300. The path I outlined is a fairly optimal approach but it does include obtaining some dropped plans at the right times.

The faster you try to skill up the more it will cost you because you are likely going to have to vendor much of it. The market can only absorb so much of any one item. Whenever possible, spread out the items you make over time or make a variety so that you do not overload the market. If you want to minimize cost by selling your items, look at the Auction House to see which desirable green or blue items that give skillups are lacking or in short supply and go for them, bypassing those that are in large supply already. Remember that an item that costs 2 g to make is better than one that costs 1 g to make if you can sell the first for a profit but the second sells for a loss.

An example of this is the Imperial Plate Armor set, all of which (except bracer) can be sold for a profit while the cheaper Thorium or Radiant armor items use less materials but do not sell.

Another way to help yourself is to have one of your characters be an Enchanter and disenchant any green item that won’t sell, since you can usually then sell the resulting reagents for more than the vendor would pay for the original item. This can often make it better to make more costly green items rather than the less costly white items, since you cannot disenchant the white items.

A new plan is dropped by Garr in Molten Core: Elemental Sharpening Stone. The rare plan is Bind on Pickup, so this will be a truly rare plan. I note that the plan does not specify sharp weapons, so I wonder if it applies to all weapons or if there is also an Elemental Whetstone plan out there.

Another new plan is:

This has dropped from Lord Kazzak and from Risen Warrior.

You get the plan by turning in a Sulfuron Ingot to Lokhtos Darkbargainer in the BRD bar. No reputation is required. Sulfuron Ingots are dropped by Golemagg the Incinerator, Molten Core Boss, at a 16% rate ( once in 6 kills). When the Sulfuron Ingot is in your inventory, you will be given a new dialogue option with Lohktos Darkbargainer. Follow this dialogue through to obtain the Thorium Brotherhood Contract. http://wow.allakhazam.com/db/item.html?witem=18628

Once you have the Contract, speak with him again to turn in the Contract and the Sulfuron Ingot for the plans.

That only requires Artisan Blacksmith, however the materials required are extreme. However, there is a reason to make it. You gather the materials to make the Sulfuron Hammer and then kill Ragnaros and get the Eye of Sulfuras drop (6% drop chance)( http://wow.allakhazam.com/item.html?witem=17204 )

You can then combine the Sulfuron Hammer and the Eye of Sulfuras to make this Legendary 2H Hammer:

I gather that this is not a Blacksmith plan and that anyone can turn in a Sulfuron Hammer and the Eye of Sulfuras to get Sulfuras. The Sulfuron Hammer is not BoP so it can be made and then transferred.

Alternatively you could do the following as suggested by Peavy on EU-Al’Akir:

Alternatively, you could keep running Auchenai Crypts for the Felsteel Gloves plans as follows: 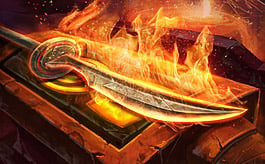