Note, they are Rogues, not Amazons. As such, +Amazon skill items will not work. Also, they cannot wield (Amazon-Only) bows.

– > They can only equip bows. Crossbows are not allowed.
– > Cast either Fire Arrow or Cold Arrow
– > Cast Inner Sight

– > The Explosive arrows do not work. There is a graphical bug so that you see the explosion, but no damage is dealt and the Rogue does not get the Attack Rating bonus associated with the Exploding Arrow skill.

Note : Fires Magic Arrow does deliver magic damage, but the Rogue’s still do not receive an AR bonus.

– > Act1 Mercs can now give you a Vigor aura via Harmony, Thorns via Edge, and Fanatacism via Faith.

They tend to stay out of harm’s way reasonably well, so life leech isn’t mandotory, but a little bit certainly helps.

Increased Attack Speed can help (check speed calculator). These mercs are good at activating Chance to Cast mods without being in the thick of the battle. Blinding, fleeing, amplify damage, etc.

Fire / Cold Arrow (If hired from Normal – Note that these stats will all be lower in NM and HELL if hired from there. With the exception of attack frequency which increases at 2% per difficulty.

Cold Arrow does a fraction less damage, however at level 35 ( Level 98 Merc with +6 All skills ) You could freeze a monster in Hell for almost 10 seconds, that’s impressive

For Armor always go for Ethereal with useful mods , the Runeword Stone is very useful and popular as well. Any Armor with plus skills is also very useful as these will boost their skills.

Helms – Tal Rashas mask is good at the start with its 10% Life Leach, when you find one upgrade to an Ethereal Crown of Theives. An Ethereal Shako wouldn’t go amiss either although you will need to socket this with some form of Life leach.

This is an excellent narration from Alter Ego and I have placed it here for your reference :

Not the most popular aura for many characters, as most of the melee characters have sufficient skills to raise their AR and the Sorceress doesn’t really need much AR as she hits with her magicical attacks. However for variant builds such as the Melee Sorc, Ranger (bow/crossbow Paladin) and Meleemancer (melee Necro) where AR is of critical importance, the blessed aim merc can be very useful. This merc can also be very helpful to Werebears who also suffer from AR problems. With the introduction of several new uniques items which grant AR (eh. Charges of enchant, zeal etc) in 1.10 though, the actual usefulness of such mercs has been somewhat diminished.

A high level Merc with this aura, and good equip, is very hard to hit, even in Hell diff. So a character who has hired such a merc is equally difficult to hit. The advantages of this are straightforward to any character, you’ll get hit less often, therefore be less likely to die. This aura has a pronounced effect on the longevity of a Necro’s minions, even when the Merc is of a low level. This aura is often a “must-have” for characters aiming to have a huge defence stat i.e. Ironman barbarians or for hardcore players. Just bear in mind that several of the monsters in 1.10 now have attacks that completely ignore defense.

The life regeneration that this aura provides is probably only of use to most characters as a way to ignore the effects of poison or of life draining items (Malice runeword for example). However to characters with life steal and high resists, this aura is going to prove to be of little use, and if the merc himself has a life stealing weapon, then the aura won’t be of too much use to him. It is probably best used for characters with no form of life leech(ie. casters). Still, it is probably better to just drink a potion.

This aura is of some limited use to the Necromancer and his minions as the continual life replenish will help keep them alive for much longer. In 1.10, the minions actually heal by themselves. I

A very popular aura for almost any character, as additional damage is always useful. The Merc himself will be doing a godly amount of damage at higher levels and quite happily tank for himself and for those who think that “the best defense is a good offense” this is the way to go.

This aura is probably of least use to a Sorceress as it does not add any benefit to her magical attacks, but should she run low of mana and be caught in a corner with only a melee weapon then, this aura will give her a chance of fighting her way free.

The effect of this aura on a Necro’s minions can create a virtual wall of death to descend upon the ranks of diablo minions. A few revived Frenzytaurs or raised skeletal warriors with a might aura on them can easily sway the tide of battle in the favour of the Necromancer.

A point to note is that even if you have a might merc whose lvl is sufficient to provide 100% extra damage this won’t automatically double the damage of your character. The formula below from Nikodemous from the Paladin forum explains how your might mercs aura factors into your damage.

Lets say your weapon does 100 points of average damage. (that being the average of the minimum and maximum shown directly on the weapon). You have +100% damage from WW

All elemental damage is added to the total, with no % bonuses on top.

The essential problem with Thorns is that you have to be hit for it to take effect, though admittedly the effect at high levels can kill many normal monsters outright. In 1.10, with the high ratio of monster HP as compared to the damage they do, thorns is more or less reduced to a novelty aura. It is nice to have around but not entirely useful.

The Necromancer Overlord is the character build that can make best use of this aura. With many minions running around the map all effected by thorns and with the possibility of an Amp Damage curse as well, this can create havoc for boss monsters that use phycial attacks i.e Hephasto the Armourer, Duriel and the Ancients. By wading through the thorns-aura’d minions to get to the player character, these boss monsters will take an awful lot of damage.

Another very useful for aura for any player character, more so for the slowing effect on monsters than any damage done. The only other choice besides defiance for hardcore player, this aura, at high levels, will bring many enemies to a near stop. Demon Imps stop teleporting all of the place, flayers slow right down and explody-headed Slayers are easily avoided. For characters using thrown weapons, bows or magic, the slowed monsters make ideal targets.

The Necromancer Overlord (or a Corpse Explosion Necro) is the class most disadvantaged by this aura, as the increased number of bodies that shatter upon death greatly reduces the Necro’s potential revive, summon or corpse explosion fodder.

On Hell difficulty, cold immune monsters will still be slowed by this aura.

It seems that not all monsters are affected by this aura. Blood Lords, Moon Lords and Death Lords of act 5 seem resistant to its slowing effects. The Frenzytaurs are immune to freezing. So do not rely on your merc to slow these monsters down. Also its good to take into account the relatively small range of holy freeze eg. archers shooting.

Lightning is damage bugged, so only choose Fire or Cold Mercs.

These Mercs can be equiped with the most MF gear, around 300%.

Do not have blocking animations. “This means they do not getting blocking check at all. The Shield will just be there for the non-blocking attributes such as defense and any other magical properties that it has such as resisitances, fast cast, skills, etc.”

They have 3 types of attacks – Their primary low level spell , their secondary high level spell, and using their sword.

They will only use their sword in melee when they get swarmed. (sometimes)

+Glacial Spike, +FireBall, etc. will help these mercs. The only places to get these are from Ormus’ Robes or two pieces of the Trang’s set. Note that the +Fireball bonus from Trang’s will be capped at +3.

Anything that is +sorceress skills, for example: +2 Fire Skills (Sorceress Only) will not work, but the +3 Fire Skills of Hexfire would.

Items that lower enemy resistance (such as the Crescent Moon runeword, facets, etc.) will benefit these mercs.

Can complete the Isenhart set (for whatever that’s worth)

Your Merc would then have :

You want +skills and Faster Cast Rate. Everything else is secondary because they tend to survive fairly well on their own unless you let them get swarmed. The new Spirit runeword is good for their weapon. You would need +strength on your helm/armor to let them use a Spirit shield since it can only be made in a Monarch, which requires 156 strength (146 if ethereal). They top out at 153 str at level 98 and have 137 str at level 85, just to give you an idea. You’ll need some +strength stuff to equip this shield at an earlier level.

The following commentary from Zath is accurate as of 1.10.

The lightning mercs are clearly lacking in damage output. Fire and cold mercs will deal significantly more damage, although the fire merc will have to hit multiple targets with each spell to reach his full potential. Overall, the cold merc may be the best choice with his Frozen Armor and Ice Blast.

These mercs possess the skills Stun and Bash.

Big 2-handed sword – They do the listed damage for both 1 hand and 2 hand swords, so the 2 handers will almost always win out. Life leech, FHR, resistances, etc are also good. They’re about the same as A2 mercs except for the weapon differences.

Armor – always go for Ethereal with useful mods , the Runeword Stone is very useful and popular as well.

Helms – Tal Rashas mask is good at the start with its 10% Life Leach, when you find one upgrade to an Ethereal Crown of Theives. An Ethereal Shako wouldn’t go amiss either although you will need to socket this with some form of leach.

These Mercs should really have a minimum of 11-15% Life Leach to ensure they stay alive, as they are very zealous and tend to run off the screen to engage everything in sight. 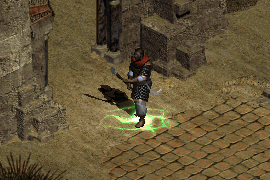