How to get to Dalaran

How to get to Dalaran

There are several ways to get to Dalaran in Wrath of the Lich King Classic! In this quick guide, we are going to discuss the different ways that you can access Dalaran. These are really quick quests that teleport you directly to the city from Dragonblight!

Today we are going to be looking at how to get to Dalaran city in Wrath of the Lich King. The good news is that you don’t need to actually walk to Silversong forest to get there. The bad news is that you have to be level 74 to get the quest that teleports you to Dalaran City. If you remembered that there is a crystal below Dalaran, you may have walked there and tried to click the crystal below Dalaran. Unfortunately, this will only tell you that you need to click the crystal inside the floating city of dalaran first.. Which is potentially problematic.

The answer to this is actually a quest in Dragonblight!

Both factions can pick up this quest at their respective cities in Dragonblight.

Talk to the quest giver and pick up the quest.
Then turn around and talk to him or her again.
This time he will have the option to teleport you to Dalaran!

If you need to look the quest up, the quest is called The Magical Kingdom of Dalaran
Now that you have taken the quest and talked to the quest giver again, you should get teleported to Dalaran.

Once you are safely inside Dalaran, you have to turn that quest in to the NPC here.

Both factions turn the quest in at the same place.

Once you turn the quest in, you can now use the crystal inside Dalaran to teleport below Dalaran.
this will teleport you below the city to the crystal I showed at the start of this guide.

At this point you can use the crystal on the ground in `forest to teleport back up at any time.

Once you’ve gotten to Dalaran though, I usually like to set my Hearthstone here.

I also recommend getting the flight path and using that to fly everywhere.
Dalaran is in the center of Northrend, which makes it a great flight path to have. It can be a pain tracking down all of the connecting flight paths though.

After Wrath of the Lich King has been out for a while, you should just be able to find a mage willing to portal you to Dalaran for a few gold.

You can also get summoned there but that’s a lot more work.

So how can a mage get teleport Dalaran as soon as they hit level 71?

Well, first they could take a shortcut and have another mage who is level 74 portal them into Dalaran.
Once inside Dalaran you can freely learn teleport Dalaran at level 71.

Thankfully though, Blizzard did not give mages the ability to teleport to a city that they can’t access.
Which means, contrary to general chat, you can get to Dalaran below level 74!

There is actually an NPC at Star’s Rest, if you are alliance, or Wintergarde Keep, if you are horde, in Dragonblight that offers you a class-specific quest.
For both the Alliance and the Horde this quest is called “Attunement to Dalaran”

To get to Star’s Rest or Wintergarde Keep, you just need to stay on the road from Valiance Keep and you run right into it. If you stick closely to the road, you shouldn’t be attacked by anything!

Keep in mind you do have to be level 71 for the NPC to give you the quest, so you can’t just go grab it early.

Once you pick up “Attunement to Dalaran” from the NPC, you will need to head south to Moonrest Gardens.
There you will find a giant hole, you will need to use the item the NPC gave you at the center of the hole.
This required me to kill Arcanimus who was standing exactly where it wanted the item to be used.

After you return to Star’s Rest or Agmar, depending on your faction..

Talk to the NPC again and he will teach you Teleport: Dalaran, which will allow you to teleport directly to Dalaran!

and that’s all there is to it!

Getting to Dalaran is actually really easy, even without a mage, as long as you know where the quests are to get teleported there. Just please, whatever you do, don’t walk to Crystalsong forest without having clicked the crystal in Dalaran. Don’t be me.

Anyways, have a good one and I’ll see you next time! 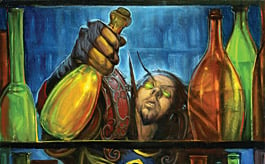