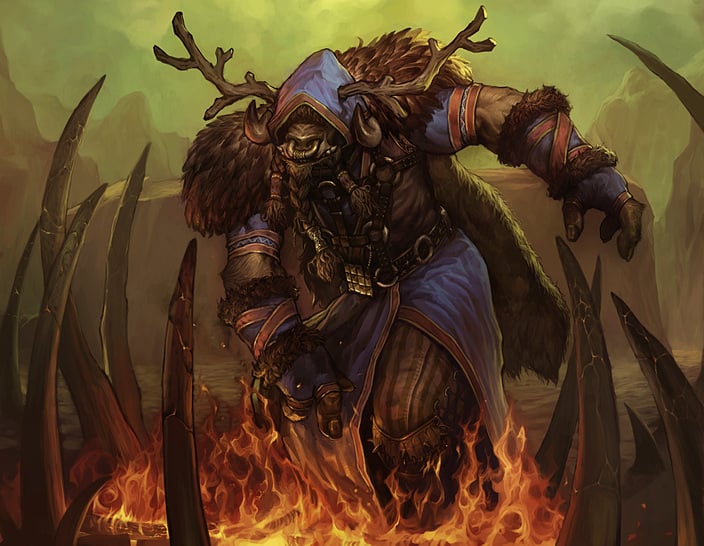 Restoration Talents are not very complicated to handle, since there are not many possible variations. Basically, there are two possible builds for a Restoration Druid.

This is the basic build for all beginners. Since there are no really useful talents in the higher feral or balance trees, just cover all the useful restoration talents and put the remaining 5 points into Nature’s Grasp. Although it’s nearly useless for raids, it’s pretty handy for solo play.

This would be the preferable build for 5man/10man instances, with a better possibility to defuse emergency situations with Swiftmend, and Subtlety will increase your chances of survival significantly.

This is the build for advanced raiders with some better gear since crit becomes very valuable with it. It takes away Swiftmend and Subtlety but gives 9% less mana cost and 0,5s cast time reduce after a spell crit. Subtlety should really not be necessary for 20/40man raids anymore and Swiftmend is worth losing for increased mana efficiency and faster casting speeds from time to time. Nature’s Focus and Improved Rejuvenation are no vital talents for raiding since Healing Touch will be your main spell and you should not take damage very often that disrupts your casts. The Talents I chose to put into Balance before Nature’s Grace & Moonglow are not necessarily to be copied (except for Improved Thorns maybe).

How to heal effectively

As mentioned before, your main spell to heal with will be Healing Touch. Healing Touch and Rejuvenation are the spells that profit the most from Bonus Heal, but Rejuvenation is just not reliable enough to use it effectively. Since the most healing in Vanilla is done with direct heals, most of it would be wasted on a full HP bar after one or two ticks. It is not forbidden to use, but only on targets that take continuous damage or have to be kept at 100% HP (Most of the time, this would be the Main Tank).

For anything else, use Healing Touch. NEVER use Regrowth (except for Vaelastrasz in BWL maybe) since it is a very expensive spell which will result mostly in useless overheal.

Of course, using Rank 10 (or 11 if learned) of HT (=Healing Touch) will only be possible if a target has lost a big enough amount of health to not result in a huge amount of overheal. This will only happen in some exceptional cases or in combination with Nature’s Swiftness.

For that reason, we make use of downranking (using a spell with a lower rank). Downranking decreases the healed amount, but also the mana cost and the cast time. This makes you not only heal faster but also increases the efficiency of your healing because the overheal is reduced and the healing done per mana point spent increases with an increasing amount of bonus heal on your gear.

So, what spells should you use now?

For MT Heal use Rejuvenation.

Of course, this depends on your bonus healing. With AQ40 gear, Rank 3 becomes more interesting because it heals about 1k with a cast time of only 2s. Just try it out yourself which heal fits best for which amount of health loss.

Blizzard added some downranking penalties to prevent you from stacking bonus heal and healing with too low ranks, which would result in a very fast heal with almost no mana cost but considerably high value.

There are two penalties to be considered:

As you can see, healing with a spell lower than rank 3 would result in a large penalty and decrease the efficiency rather than increasing it.

Here is some useful information on Rank 3,4 and 10 (calculated with 500 Bonus Heal):

Obviously, Rank 4 is the most effective heal with good HPM and HPS values. With better gear and increasing bonus heal, the effectiveness of Rank 4 compared to Rank 3/10 will increase more and more. Still, Rank 3 will be more interesting with increasing gear, because the cast time of Rank 4 is just too slow to have a chance against paladins/shamans or priests.

I will not provide another huge item list here, because there is already a very good post in this forum by Eleana and I want him/her to get the credit for the great work.

The most important addons for any healer are of course raid frames and decursive. There are some good raid frame addons, you can choose any that fits best to your playing style, for me, it is important to have a range check and a hot display so I don’t overwrite another druid’s Rejuvenation. Recommended for raiding is also the display of incoming heals (Grid) which will increase the overall efficiency and increase the survival chance of the whole raid. You should always display the health deficit to produce a minimum of overheal. To show the duration of hots, use the HotCandy or DoTimer which works fine at least for your own hots.

I won’t say anything specific about keybindings, of course, you should have every ability on keybind, clicking is a waste of time and also a risk to fail because it distracts your attention.

I would always prefer Speed on Boots to the other enchants, the stat increase is just too small to keep up with walking speed increase for better movement.

Consumables are very important for vanilla raiding, even if it can take a lot of time to farm them all. If you want to be a successful raider, you will have to work for it.