The official announcement can be seen Here.

According to Warmane staff:
The Warmane TBC Release Date is scheduled to be May 20, 2017 at 13:00 server time.
Reddit user Ikzun has said that this should be around 8:00 a.m est.
Please post a comment below if you can personally confirm this time.

The details on the realm are as follows:

Since the start of the PTR Two changelogs have been released with over 2400 bug fixes! These guys have been doing work!
Warmane’s Wrath of the Lich King servers are notably high quality themselves, so I would expect a pretty solid TBC server from Warmane.
I’ve personally played on their WoTLK servers for years and gameplay wise, they are tough to beat. I hope their TBC server can match this.
We have some good WoTLK server alternatives but our community could use more quality TBC servers.

They are holding the cash shop off for a month and implementing a progressive cash shop. I’m not a fan of the cash shop as a whole but everyone has to make a living I guess.
The “Progressive” approach to a cash shop is new to me. Their plan is to only allow the purchase of already obtained items. While this will make the initial climb a little more fair and balanced. In the end, it’s going to be the same as their other servers.

There are plans to back-port the TBC fixes that are applicable to the WoTLK servers. I know some guys are very happy about this, just to get those annoying bugs out of their life once and for all.

Dual spec implementation is being considered as a website feature. Staff (Proterean) has stated that they don’t want to implement a custom NPC or command because that breaks immersion and I for one agree.
“The way we designed Lordaeron was always so its content can be versatile and immediately implemented on other expansions we have offered. What we also, immediately realized is because the content is so versatile, it can go backwards as well.” This means they are working off of their WoTLK core instead of the stock TBC cores other servers have released with. I think this will be really interesting to see what kind of bugs do crop up.
You can find the initial announcement thread Here. It contains a lot of other details I may have missed.

I’m definitely going to check it out and I hope to see you guys there too!

A lot of people have been asking about the cash shop and I wanted to share some new information about that. 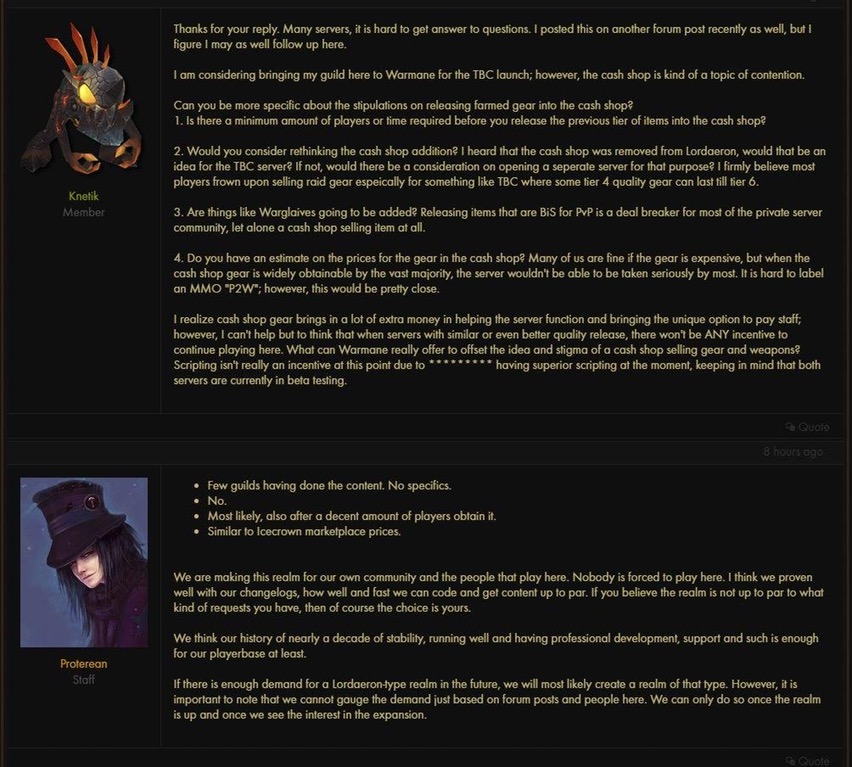 Progressive cash shops isn’t a new thing for Warmane, they did it on their MOP realm.

I wasn’t aware of that, I only played on their Wrath servers. Thanks, that’s kind of interesting but just seems like a gimmick to make people feel better.

If you plan to start the game it is important to check the server status;) wow realm status will help you choose the best server for you.