This is a guide on Gehenna the third boss of Molten Core.

Gehennas is a fight very similar to Luciferon, With a few new abilities thrown into the mix.

To start the fight,
The tanks should seperate the Flamewalker adds from the boss
The Adds have a few important abilities to take note of.

The Adds have fairly small health pools making them fairly easy to burn them down quickly.
When you have MC on farm status, You might consider stacking the adds with the boss and just cleaving them down.

Once the adds are down, Time to focus on the boss.

Targets the tank, and Then random players in the raid.

Shadow resist pots and buffs are helpful against this ability.

An AoE debuff that reduces healing received by 75%

Very important to watch for this ability

Make sure you Decurse the tanks first, then the rest of the raid members.

It’s a pretty straightforward fight so as long as you keep these abilities in mind and react accordingly, You shouldn’t have any problems. 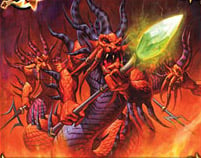