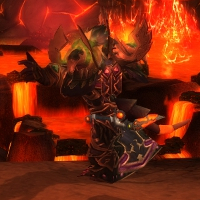 Macros and addons are an integral part of a raider’s arsenal as they canmake it easier to perform a variety of tasks, improving your overall gameexperience. On this page, we present macros and addons that can be useful to aFire Mage in World of Warcraft MoP 5.4.

The other pages of our Fire Mage guide can be accessedfrom the table of contents on the right.

Counterspell at your focus, if you have one.Otherwise, Counterspell is cast at your current target.

If you are using

Glyph of Counterspell, then you can removethe /stopcasting from the macro.

Spellsteal works in the same way as the above macro for

This macro will cancel your current spell cast and make you blink away. Thissaves you the trouble (and the time!) of interrupting your spell cast manually.

Slow Fall is very useful. If you are hoveringover a party member (be it on the raid frames or on their actual character)it will cast Slow Fall on them. Otherwise, it casts it on your target,if it is friendly. If your target is not a friendly partymember, then the macro casts Slow Fall on you.

To sum it up, use the macro to keep your assignment controlled and pressalt while using the macro to castPolymorph on a new enemy.

Note that this macro will slightly interfere with the

Spellsteal macros given earlier. If you try to use one of these two macros,it will result in the spell being cast on your sheeped target (which is your currentfocus). In such cases, use a simpler macro for Counterspell and Spellstealthat casts the spells at your current target.

This macro allows you to cast

Greater Invisibilityeven when casting a spell.

This macro casts either

Ice Floes, depending on which you have picked.

Fireball without running the risk ofcancelling your current channel of

Pyroblast without running the risk ofcancelling your current channel of

Using this macro to cast

Combustion is advised. When you criticallyhit your target with

Pyroblast and the subsequent

Ignite is high enough for Combustion,you want to cast Combustion right away and not wait for your current cast tofinish. If you wait, you run the risk that

If you are playing a troll, you can add a /cast Berserkingbefore casting Combustion for increased effects.

Presence of Mind and

Alter Time, which areoff the global cooldown, before casting

Naturally, it is advised to add /use 13,/use 14 (for your on-use trinkets),and/or /use Potion of the Jade Serpent, as wellas any other spell/item that grants you increased damage,before the/cast Alter Time command.

Here, at Icy Veins, we useElvUIfor all our characters. This addon is a complete replacement of the defaultUser Interface. It comes with almost everything you need to perform properly:action bars, cooldown timers, proc display, etc.

We strongly recommend that you get this addon.

Boss mods are addons that warn you about boss abilities and give youlive advice on how to handle some mechanics. We strongly recommend you toget one such addon. At Icy Veins, we mostly useDeadly Boss Mods,the most popular boss mod. A good alternative isBig Wigs.

Omen Threat Meteris the most popular addon for displaying the current threat levels on yourtarget. We recommend you to use it to avoid taking aggro when the tank is still buildingup threat on an enemy.

Parrot andMik’s Scrolling Battle Text are highlycustomisable addons for displaying floating battle text while in combat (incomingheals, damage of your spells, etc.). They both work very well by default.

Recount is awell known addon that most people use for displaying current DPS or HPS(Healing Per Second). We advise you to also use it for checking what youtake damage from and if the share of damage/healing you do with each of yourabilities is similar to that of other players of your class.

A lightweight alternative to Recount is Skada Damage Meter.

WeakAuras is anextremely useful addon that allows you to have visual effects on your screen,helping you track your buffs, debuffs and cooldowns. It is highly customisableand it can make it much, much easier to keep track of your procs and play yourspec more proficiently. It can also be used for a variety of otherfunctions.

ElvUI comes with decent raid frames. The only real reason for usingGrid andGridClickSetsis if you want to be able to decurse raid or party members by rightclicking their frame in the raid of party frame. If you choose to go withGrid, then you might want to also useGridStatusRaidDebuff.

While the aforementioned addons are enough to play decently, you mightwant to check out two other addons:

Many players use Combustion Helperto keep track of their

Ignite value and find the appropriate time to cast

My Big Ignite is analternative to Combustion Helper. It also tracks your

Ignite DoT, so you canproperly time your cast of