Fankriss the Unyielding is a sand reaver, the brother of Kurinnaxx, and the third boss of Ahn’Qiraj.

Ironically, the most threatening thing about this fight is everything BUT Fankriss. Lets cover some of his abilities though –

Mortal Wound is a stackable debuff place on your main Tank. Reducing healing by 10% per stack. (It’s important to force Fankriss to face AWAY from the rest of the raid party to avoid wiping) Rotate tanks when the %’s start becoming too high to compensate heals.

Vekniss Hatchlings are scarab beatles that are spawned periodically throughout the fight from nearby bug tunnels. You will need one or two off tanks to take aggro with AOE taunts to avoid wipes. (Wait for your raid leader to give the signal to clear them out)

Entangle periodic ability where a nearby player will be teleported to one of the bug tunnels. This occurs on a new wave of bugs spawning. (Healers need to be cognizant of this to make sure your raid members aren’t getting picked off by the newly spawned wave.)

Spawn of Fankriss will periodically spawn in groups between 1-3. It is important that these are focused ASAP due to their Enrage mechanic. These mobs are vulnerable to stun effects.

Depending on the version of Vanilla, the safe spot may vary.

Step 1: Find your safespot
Step 2: Have your main tank get full aggro of Fankriss and spin him around, facing away from the rest of the raid.
Step 3: The rest of the raid will group up at Fankriss’s tail.
Step 4: Off-tanks will be responsible for taking aggro of scarabs as they spawn.
Step 5: DPS/Ranged DPS will focus on Fankriss. Switching to the “Spawn of Fankriss” as they come in. Only killing side scarab waves if the raid leader calls for it.

Tank Note: Be ready to swap out main tanks due to the “Mortal Wound” debuff.

Make sure your healers are properly watching your main tanks health, as well as anyone being teleported by “Entangle“.

If all goes well, CONGRATS, YOU’VE DONE IT! 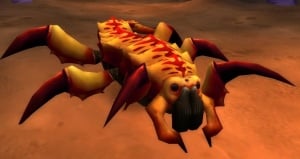