This MoP Horde Leveling Guide is aimed at showing you where to level more-so than walking you through each quest.

If you’re a tauren, you’re probably going to start in Mulgore. The first things you’re going to do is follow the starter quest chain up to level 10. Once you finish with that, head over to Thunderbluff. you should automatically learn the flight paths. Now you can fly to the barrens.

As an Orc, you can do the simplest quests, kill these, collect that etc.
Skip everything in Durotar except for the beginning quests.
Once you hit level 10, you’ll start moving to the start of the barrens,
Do not go to the Crossroads until you hit 12 or 13 unless you really have to.

Do the starter chain quests until you get to Silvermoon.
There should be a portal in a building at the top of the map.
It looks like a ball of light.
This will port you to the Undercity.
Leave the Undercity and go to the ship towers.
Once there take the portal to Orgrimmar.

Either do the starting quests here or grind until level 5.
At level 5 go to the nearby towns and level to 10.
Head to the ship towers and take the portal to Orgrimmar.

Crossroads
At level 10+ locate a nearby flight path and fly to the Crossroads.
If you get stuck in the middle of the quests in the Barrens or want a change of scenery, try heading to Azshara. Azshara will have plenty of quests to reach level 20.

Ashenvale
Head to Ashenvale quest here as best you can. It may be a bit crowded but make sure to at least hit level 25.

Southern Barrens
This is where you should level from 30 to 40.

Dustwallow Marsh
At level 40 you should go to Dustwallow Marsh. This place has plenty of simple and easy quests. It’s a long run/walk but it’s a great place to level till 45.

Tanaris
After level 45 fly to Tanaris and start questing there.Don’t bother with the arena quest, it’s a waste of time waiting on the mobs. Stay in Tanaris until you reach level 50.

Winterspring
Head to Winterspring once you hit 55. You should stay here until at least level 62 to avoid Hellfire. If you really want to though, you can go to Hellfire at 58.

Zangarmarsh
You should stay here until level 65, It’s a really good area for 62 to 65.

Sholazar Basin
Once you reach level 76, you should fly to Sholazar basin and stay there until at least level 78.

Icecrown and Storm Peaks
Once you get to level 78 you should fly to the Argent Tournament and level there until level 80. Most servers have issues with Hyjal so I would recommend leveling in Storms Peaks until level 81/82, the higher the better.

Mount Hyjal & (Uldum or Deepholm)
Once you hit level 82 make sure you pick up the quests from Valley of Strength in Orgrimmar. A giant Board gives out the quests. One quest will point you to Moonglade, complete that quest and then you will have a quest to head over to Mount Hyjal.
Make sure you take ALL of the quests in this area and try doing as many of the chain quests as possible. You should have enough to reach level 83 or 84.
If you only make it to 83 and a half then you’ll want to go head over to Uldum. You should still take the Board quests again from Valley of Strength. The map will not tell you where to go for the quests but you will need to head to Tol’vir, make sure you go pretty deep inside because it won’t show up instantly. You could also quest at Deepholm until level 84.

Pandaria
When you’re 85 you’ll want to head to Pandaria, the portal is located in the Valley of Honor inside Orgrimmar.
At this point you just work your way across Pandaria doing the quest chains in each zone.
Jade Forest
Kun-Lai Summit
Townlong Steppes
Dread Wastes 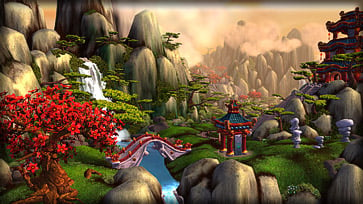