Alerts you when a Boss begins to cast certain spells or use certain skills, allowing you to move, counter, stop damage, run away, etc.

Boss mods for all raid bosses
Colored raid warnings (players will be colored according to their class) with icons – so you will know what’s going on without even reading the message
Auto-respond during boss fights. DBM will inform anyone who whispers you during a boss fight that you are busy. These messages contain the name and health of the boss as well as the raid’s status. This feature is completely optional and can be disabled by player or even raid leader for the entire group.
HealthFrame: you can enable a simple frame that shows a health bar for all active bosses. This is enabled by default for multi-mob bosses like Four Horsemen
Bars can be enlarged with decent effects when they are about to expire
Crash recovery: you had a disconnect or crash during a boss fight? No problem for DBM! It will request the timer and combat status information from other DBM users in your raid group and you get your timers back
Synchronization system for accurate timers
Modular design – all boss mods are plugins and can be exchanged, removed or updated separately
Load on demand – all boss mods are separate AddOns and they will be loaded when they are needed. So they don’t use memory or cpu until you enter the corresponding instance
Special effects like the screen flash effect, huge warning messages and sounds will draw your attention to critical events
Bars can change their color over time and flash before they expire
There are many bar designs to choose from, all designs are are customizable: you can change the color, size, icon position etc.
Support for SharedMedia, so you can use any texture for your bars
Option to create custom timers, so-called “Pizza Timers” for your pizza or whatever you prefer to eat while raiding. You can also send those timers to your raid group
HudMap built in to achieve greater visuals with heads up display in many different and creative ways
Support for voice packs in many different supported languages.

/dbm – shows/hides the GUI
/dbm help – Shows all the other slash commands and how to use them. 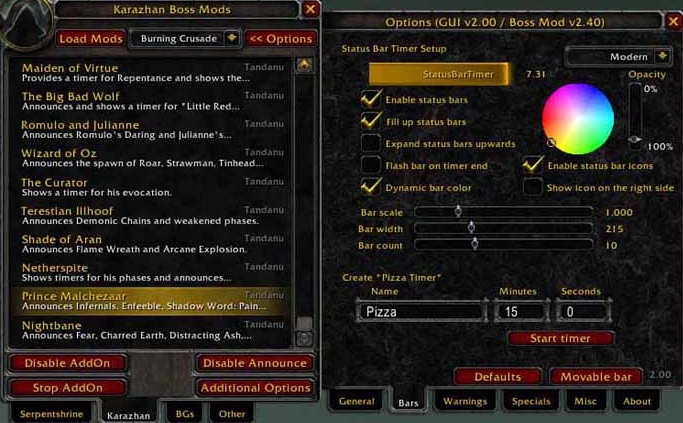