Completely customize the way others see you play World of Warcraft via Discord’s Rich Presence API & the pypresence API by qwertyquerty!

In addition to having the ability to change your discord status from “Playing <x>”, This mod offers plenty of customization options to specify entirely how others see you play. From having your current zone show up, to which instance your in, as well as which realm you’re in, and far more. The customization possibilities are limitless, with the only real limit being how creative you customize your display.

CraftPresence will detect and adjust its abilities towards the following versions: 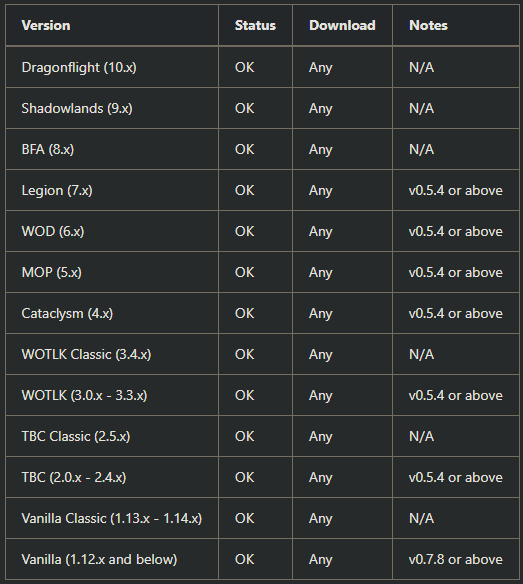 As this addon uses a singular codebase, Addon code is loaded depending upon which version you are loading it within.

For example, this will mean that while the placeholders will remain the same, their contents may change depending on the version.

Aditionally, while PTR and pre-release versions of the game should work fine, they are often untested until closer to release and may contain issues.

Keep in mind the following:

In some configuration areas, CraftPresence provides some placeholders to make things easier:

Keep in mind the following:

These placeholders can be added within the General Settings menu within the Config Gui.

As these placeholders are global, they can be set in any of the RPC fields within Presence Settings and customized at a deeper level via usage of the inner-placeholders.

These placeholders are able to work alongside of/within the aforementioned Global Placeholders.

You can configure some of these placeholders throughout different areas of the game.

Not seeing an Icon you like or have a suggestion for an Icon to add/modify on the default Client ID?

If so, you can make a request on my Issue Tracker, with the following requirements:

Additionally, you can also create your own Set of Icons by following this guide

Need some assistance with one of my mods or wish to provide feedback?

I can be contacted via the following methods:

Additionally, codebase documentation for this mod is available here with further guides available on the wiki

This Mod is under the MIT License as well as the Apache 2.0 License

This project makes usage of the following dependencies internally:

As with other RPC Mods, this Mod uses your in-game data to send display information to a 3rd party service (In this Case, Discord).