Perl Classic Unit Frames are a complete rewrite of the original mods by Perl. They replace the default Player, Pet, Target, Target of Target, Party, and Party Pet frames and add dedicated frames for many other units (Focus, Focus Target, Party Target, Target of Target of Target). It has been a high priority to maintain the look and feel or the original Perl mods while expanding functionality. The mod has been recoded for performance and is built around the Blizzard UI usage of events. Slash Commands /perl
Q&A I’m seeing double party buffs for some reason, what gives?

I am having massive dead spots for clicking on some of the unit frames, what’s wrong?

The default party frames are showing up with red lightning bolts. What’s going on?

Will you be bringing back support for Perl_PlayerBuff?

Where are the raid frames?

The scaling is all messed up! What do i do?

Can you add this feature? 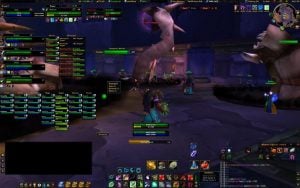