Omen is a threat meter.
Basically, enemies in WoW decide who to attack by deciding who is the most threatening based on the abilities you use. What Omen does is provide accurate values of your group’s relative threat level on individual enemies, so that you can see when you’re in danger of pulling aggro (or, if you’re next on the snack list if your tank bites it). This info is usually only critical in raids, where only tanks can survive aggro, but it’s useful for any multi-player situation.

FAQ
How do I get rid of the 2 vertical gray lines down the middle?

Why does no threat data show on a mob when I target it even though it is in combat?

Is there ANY way around this Blizzard limitation? Not being able to see my pet’s threat before I attack has set me back to guessing.

Can we get AoE mode back?

The tooltips on unit mouseover shows a threat % that does not match the threat % reported by Omen3. Why? 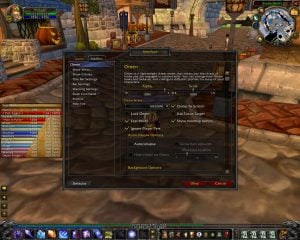