Altoholic is an Ace 3 addon written for people who dedicate most of their time to leveling alts, and who want to have as much information as possible in one addon. The main feature of the addon is the search functionality which allows users to search their alts’ bags or loot tables in an Auction-House-like frame (see screenshots). All this with multiple-realms/accounts support.Features:Account-wide data summary:Characters’ talents: Full talent trees & glyphs are supported for both specializations.

View containers (bags, bank, keyring) of all alts, on all realms.Guild banks : You have 10 alts in 10 different guilds on the same server, all of them with access to a guild bank ? Not a problem, you can see them all here.E-mail: allows you to see which alts have mail without having to reconnect them. The addon will tell you when mail is about to expire on a character. Threshold configurable (up to 15 days). Multiple realm support as well. Mails sent to a known alt (one you’ve logged on at least once) will be visible in the addon without having to reconnect it.Equipment: See the equipment of the current realm’s alts in one screen. Very useful when purchasing stuff for your alts at the AH. Multiple realms supported. Right-clicking any equipment piece will allow you to find an upgrade, this feature is similar to the official wow armory feature, and is quite performant, even though it doesn’t match the accuracy of the official one.Search: the most important feature of the addon, it uses an AH-like frame to display search results. You can either search bags on the current realm, on all realms, or a loot table.The loot table is a table based on AtlasLoot, but which contains only item id’s, and therefore keeps memory usage minimal.The Search menu allows you to find items based on their name (even partial), level, type or rarity, almost like at the AH. It is also possible to search known recipes.Quest Log: See the quest logs of all your alts, as well as an indication of which alts are on a specific quest. Clicking on a quest link in the chat log will tell you which alts are on that quest.Suggestions: Currently, only profession leveling suggestions are available when mousing over your current level in a specific profession. Suggestions are based on the leveling guides posted on the official US forums (credit goes to their respective authors). The addon also suggests you where to quest/grind xp depending on your character level.Auction house: You can see which auctions/bids you’ve placed with an alt without being logged in or being at the AH.Professions: You can browse all known recipes in a thotbot like frame (see screenshot).Mounts & Pets of all your alts.Guild Members: a list of your connected guildmates, along with their alts (if they’re using Altoholic too), and their average item level. Clicking their AiL will also allow you to “remotely” inspect their equipment.Guild Skills: a list of altoholic users in your guild, along with their alts and direct profession links. All professions are available in one click.Guild Bank tabs: a list of altoholic users and the time at which they last visited the guild bank. If you haven’t visited the guild bank for a few days, you can remotely update your local data without going to a capital city.FAQDoes the addon support multiple accounts ?

I want to organize my bags differently, can I do it ?

AltoholicWhen searching the loot table, some items do not seem to appear in the search results, why ?

Should I get rid of AtlasLoot ?

Do you support all the loots listed in AtlasLoot ?

Why are certain items listed more than once when I search loot tables ?

When inspecting other players, the source seems incorrect, why ?

A recipe tooltip tells me that an alt could learn the recipe when he already knows it, why ?

If you can see the recipe, then the problem is most likely this:

If the bold part of these two names do not match exactly, then no match can be made. Working around this would imply keeping track of exceptions, which I do not intend to do, as this requires a lot of manual effort for little return.If all this did not help explaining your problem, then there might be a bug to report 🙂 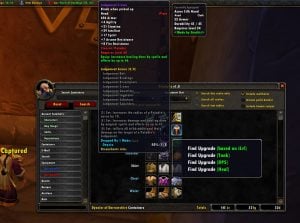