I recommend GatherLite Which can be found at https://legacy-wow.com/classic-addons/gatherlite/ this addon has been modified to work in Classic.

Its crucial feature is node synchronization via guild chat.

It is based on:

* patch of the addon with node broadcasting on gathering:

Major version is nailed to “1” for the 1.12.1 client compatible versions.

In other ways versioning complies with semver.

The text below is from the parent addon readme.

Gatherer is an addon for herbalists, miners and treasure hunters in World of Warcraft. It’s main purpose is to track the closest plants, deposits and treasure locations on you minimap.

The addon does not track like a tracking ability does, rather it “remembers” where you have found various items in the past. It does this whenever you gather (perform herbalism, mining or opening) on an item, and records the specific map location in it’s history. From then on, whenever the item comes into range of being one of the closest 1-25 (configurable) items to your present location, it will pop up on you minimap.

When you view your main map, you will also see the item locations marked on the particular map you are viewing there.

Just use the game as normal.

When you gather things, they will appear on your minimap and your main map.

If you want to configure the addon, click the Gatherer configuration icon floating around your minimap frame or type /gather options.

– forced UI options that were meant to be saved as numbers to number in default and changed values.

– Fixed Event processing not to occur while zoning.

– Addon init, use a string forced to lower case to get addons name (which match the folder/toc name, while windows is not case sensitive, the WoW client is) to have initialisation occur even if the folder is misnamed on hard drive.

– Quick fix for fishing to prevent recording on some silithus mobs.

– Tooltips usage should be fixed (ie. no error if you don’t have the proper tooltip)

* First recording method, uses Trunks and Bloated fish to automatically record where you stand (type assigned to Floating wreck, even though it’s not always true).

* Second record method, uses the node tooltip, in order to do that, you must autoloot (shift click the bobber) AND move slightly the cursor to make the node tooltip appear.

– default value for max distance is now 20 instead of infinite, search limited to current zone.

– Added iconshade theme, icons are displayed all the time, but shade under min icon distance (40% by

default if shade under min distance is set at 100).

– Silithus scale and offset fixed (courtesy of an unknown contributor on the forum who did the math).

– zoomlevel (indoors too) taken into account for minimum icon distance.

– Dark Iron recorded as Iron (english version) and not recorded (french version) now records (Note that english users will have to use the node editor to correct the icon type for already recorded dark iron).

– Modified init for UNIT_NAME_UPDATE to work along with VARIABLES_LOADED to allow proper initialization when changing character without exiting the game.

– French localisation, all “veine” were translated to “filon”, this has been included in the fix item facility of the Zone Rematch.

– Added divide by zero check and default value in report and search routines for % calculations.

– Minor fix to Gathering event well no skill (or too low skill) is used so that the item count isn’t increase (or set to 0 for a new node).

– Upgraded transition matrixes number to 1.7 for German and French (identity matrix, zone order did not change between 1.6 and 1.7).

– error on load fixed (False instead of Hide in widget call).

– error opening report dialog in specific place fixed (Onyxia lair, etc.), change base dialog placement so the handle should be grabbable to move the dialog where you want it.

– box icon changed to the same one as Crates (previously using the Chest one).

– changed icon for Blood of Heroes to correct one.

– polling the skill tree for existing Gather skill on the character will trigger only at startup and upon learning new skills (tree skill state will be conserved too, contrary to old behaviour which opened everything every 5 seconds)

– Filters in the world map screen reworked in a single dropdown menu.

– Reorganized content of UI_localization.lua so that it’s easier to fill in, texts and tips regrouped by dialog.

– Upgraded myAddons support up to version 2.0 standard (along with help pages for english, french and chinese).

– redistributed world map buttons in subframes of the GathererOverlayFrame (rougthly 100 per subframe).

– Ingame edit utility for nodes (delete, toggle bugged, change icon, type, gather name) with selectable scope at node, zone, continent or world level for propagation of the change, alt right click on a node on the world map to display the dialog.

– added option to have an alpha value for mininotes under the minimum icon distance (100% by default).

– support for Chinese WoW added (thanks goes to biAji for localization).

– scaled down buttons and dropdown menus on world map by 30%

– added checkbutton in configuration dialog to ignore the show/item item button (enable at your own risk).

– layout in configuration dialog rearanged to put all buttons in the subframe they belong to.

– brought back the maximum number of items displayable on the world map to 300 (600 was causing disconnect in some cases) as a temporary fix until the world map display can be done another, meanwhile use the filters provided in the configuration dialog to see what you’re interested in.

Note that this does not resolve the basic issue (the delay itself isn’t in Gatherer but in the game UI engine) but seems to make the problem not occur. Also it almost never seems to occur when you come back to the map your character is in before exiting the world map.

– a side effect of the new format will fix wandering icons on the minimap for users importing data  (could previouly be fixed by doing a zone match with same source and destination or running the RecalcNotes function which was removed since it now serves no purpose without minimap coordinates in the stored data).

– caught a few memory leaks (still plenty around though).

– added /gather filterrec slash command and corresponding checkboxes in the configuration dialog to link actual recording of nodes to the current filter content (broken down by characters and gather type).

– Changed database format, replacing gtype and icon by indexes (saves 30-50% space depending on database content), complete conversion will only occur on using the zone match facility (same origin and destination).

– Footlockers (need to unlock them before being able to record them, so this is rogue only strictly speaking)

– New set of icons for Ores and Un’Goro items (courtesy of Wt, Melina and Iriel).

– Rich Thorium now has it’s own icon (a placeholder really, until someone provides something more appropriate), the change will appear immediately on the world map, change on the minimap will be visible only after using the zone match facility (same origin and destination).

– World Map now has a show/hide button for items (lower left corner), It is off by default and will reset to that whenever you change zone (or miniregion), if the display is off, the delay/freeze while displaying items on the world map won’t happen (if any) until you click to show the items.

– Filters are now accessible from the world map (note that changing the on/off/auto setting from the world map will bring you back to your character’s current zone map). This is off by default, to enable it, check the button in the configuration dialog.

– Interface to delete/flag node as bugged (accessible through alt-right clicking on an item, which used to delete it right away), these buttons appear on the lower right of the world map frame when available.

– Localized clients (ie. non-english) will get a popup at startup if a version new of Gatherer is installed as a reminder to check for new zone matches), this will be enabled when appropriate.

# english: barrel gathering should now read barrels that have the keyword at the beginning of the gather text

– delay opening world map with a huge number of items should be reasonable now.

– Icon size on worldmap can now be changed (between 8 and 16, included, hit enter in the edit box to validate the new value)

– tooltips added for all UI elements

– ingame item deletion facility added (alt right click on item on the worldmap), alt mousing over an item in the worldmap display full name and item indexes in the GatherItems structure.

– misc: added a hundred more buttons to display items on world map as part of the large item DB fix.

* UI: New movable UI button on minimap border, gives access to a quick toggle menu for main filters (options for show/hide the quickmenu and move the minimap icon in the options dialog).

* UI: by clicking on the quick menu title, you access a configuration windows for Gatherer options (can also be accessed by using /gather options).

* Filter (UI only): possibility to select specific objects to display.

* Filter (UI only): couple rare ore/herbs so that they can be displayed together (ex: tin and silver shown together by selecting only one, or for herbs selection swiftthistle will show briarthorn and mageroyal)

* Filter (UI only): prevent gatherer icon from displaying when a node is closer than the min icon distance (used to switch between theme icon and item icon).

* Various: GatherRegionTable moved to it’s own file outside of Gatherer.lua

* Bug Fix: remaining RegisterForSave removed from code, in some case they could cause a fatal client error with #132 error (note: this is not specific to gatherer, it’s true for all WoW addons)

* Bug Fix: Real zone text is now used that should alleviate difficulty to display the map in some zone on first try (ie. Ironforge).

– Fixed some other small stuff

– Fixed nasty bug where icons would not appear on minimap.

– Tweaked map-minder to be less annoying

– Reduced size of icons on main-map, made partially transparent and popped ’em under the player icons.

– Added “Map Minder”. This little beast will remember your last open main map for 60 seconds and then take you back to it. If it’s more than 60 seconds, you get taken to your current location. You can turn it off with the new “/gather minder off” command, but then you will just be taken to your current map every time you close and reopen your main map.

– Changed the icons, so they no longer have a border… nobody liked em ‘cept me… Poot.

– Added icon fading in your minimap so that as the icons get farther away, they will progressivly fade out.

– Fixed a bug when no arg1 was passed to the buffer reader.

Fixed ore and treasure not appearing on main map as icon, but as a circle.

– Fix ore gathering bug that was causing ore to not be recognized.

– Fixed bug where data was not initialized causing error

1.8.4: (many thanks to Jet who contributed much for this version) 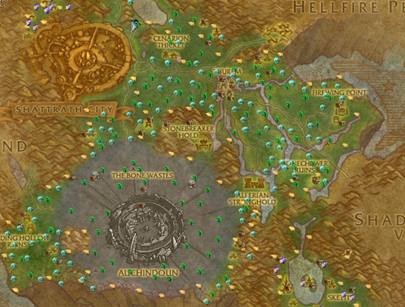 This does not function in Classic Beta. Gettign 70+ errors

Doesn’t work on most recent “Stress-Test”

does anyone know if it’s working right now?

This doesn’t appear to work on Mac

Is not working at all. Installed just like all my other addons but this one won’t load. Yes I ticked “load out of date” ect ect

Sadly it doesnt work for classic release yet

Im hoping that this one gets going soon, I loved this addon, it was a perfect gathering tracker

GatherLite works where this one doesnt FYI

GatherLite sucks, it doesnt allow you to see the tracking to see if there is a node or not, and it doesnt have a database to share, so therefore people WANT Gatherer, but I see that it will NEVER be updated so people you all need to give up, its dead, dont know why they decide to have Gatherer on the list for classic addons when they know it doesnt work and nobody will ever fix it

Z A
Reply to  Travis Chandler

Travis Chandler
Reply to  Z A

Thats what I use, TrackResources