This is a plugin for Skada that adds information useful for evaluating a tank’s performance. You must have Skada installed for this addon to work. It will add a mode to Skada called “Healing Required”, which is the amount of healing each person took from other players. Put another way, it is the same as Healing Taken minus self healing. The lower this number, the better.It will also add extra information to Damage Taken, if you are using that module, showing which tanking buffs were used for each damaging spell. For example, if a Druid tank was targeted by 4 Impales, it may show that Barkskin was used for all 4 of them, Survival Instincts for 2 of them, Pain Suppression for 2 of them, Dream for 1 of them, etc.Simply put, a better tank will require less healing. He or she uses cooldowns and self-healing abilities well to reduce or heal incoming damage, so that healers don’t have to. The less healing he/she requires, the better he/she is doing (assuming they keep aggro and point the boss in the right direction). Being easy to heal also frees the healers to focus more on keeping everyone else in the raid alive.Damage Taken is not a good metric, especially for DKs and Paladins who can do a lot of self-healing. This addon gives you a better metric. Many tanks are used to seeing damage meters, and so are tempted to do as much damage as possible. There may be cases when that is appropriate – such as when your raid is close on an enrage timer and healing is not an issue – but in general it is not. This addon seeks to correct that trend by offering a different number to optimize (because everyone loves seeing numbers!).Be careful when comparing two tanks or two fights with this number. Like Healing Done, Healing Required can change a lot depending on the fight and the activity of other players. In a raid with two tanks, the one who actually tanks the boss more will likely require more healing – that does not mean he or she is a worse tank. Also, very active healers can “steal heals” from a tank who would otherwise heal his or her self. Finally, some fights have mechanics like high-damage periods that depend on the performance of the entire raid to shorten. In those cases the entire raid’s performance will affect Healing Required. If you keep these factors in mind as you get a feel for Healing Required, you will be on your way to learning what makes a better tank.The addon keeps a list of interesting tanking buffs. If you are not seeing one in the damage taken details that you would like to, check this list to see if it is missing or if the spell id is incorrect (idTip is great for this). Leave a comment with any corrections or additions you’d like to see.Death Knight 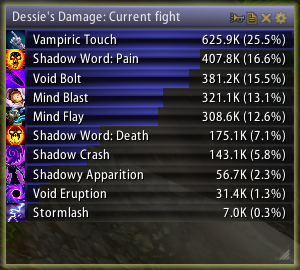